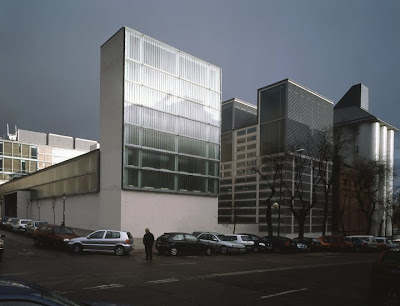 From the outset of this project, the powerful and ominous open spaces of the former El Aguila brewery, by then unknown to the public, were the driving force for the arrangement of the different activities. This was carried out through the construction of voids, interfaces and expansions of surfaces as part of an effort to visualise an exterior space which modernism had regarded as a mere void. The space between the buildings has thus become the defining element, upgrading multiple itineraries, planes of activity and information and changing the linear nature of the complex as a whole by establishing invisible links between the different constructions with their industrial scale and materials.
The Madrid Regional Government Archives and Library in the former El Águila brewery is a centre for the preservation, custody and dissemination of the Region’s historic documentary heritage, ultimately aimed at ensuring the transparency of administrative processes and citizen’s rights. The construction, an extension of the Paseo del Prado cultural axis, is part of the political desire to open Madrid to the south and the cultural desire to safeguard the remains of the city’s historic industrial heritage.